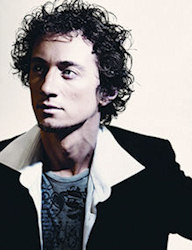 The young pianist Ruslan has already traveled the world, playing with some of the biggest names in jazz and pop music. Born in Uman, in what is now Ukraine, Ruslan’s musical heritage comes from a family rich with generations of musicians. He was exposed early in his youth to American Jazz and improvisation, and began to see music as a mission in itself, a source of passion. Ruslan’s family moved to Israel when he was ten, where he continued his music studies. At 17, he captured a prized scholarship to the Berklee School of Music, with personal assistance from legendary vibraphonist Gary Burton. After graduating in 2003, Ruslan jumped right in and started playing with the most prolific and legendary names in Jazz. He played on and wrote material for Stanley Clarke’s The Toys of Men on the track “Jerusalem.” He’s also collaborated and toured the world with Dennis Chambers, Marcus Miller, Seal and Brian McKnight. With his first solo album, Ruslan,on Stanley Clarke’s Roxboro Entertainment Group label, Ruslan is setting his sights on his own music. He considers the creation of his music to be a quasi-spiritual experience. Pursuing his goal of creatively exploring, thus always growing as a musician.