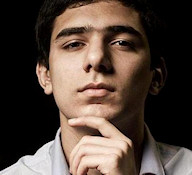 Jazz pianist Beka Gochiashvili started playing the piano at 4-years-old and by 9 was performing in clubs in his home of Tbilisi, Georgia. At age 11 he participated in the Saulkrasti Jazz Festival in Latvia, where Beka’s talent was noticed by Lenny White, who eventually became his mentor. By the time he was 12, Dr. Condoleezza Rice, then Secretary of State, and American cultural envoys helped him come to the US, where he was accepted at the Juilliard School of Music. In the interim years, Beka performed in the International Festival “Georgians Play Jazz” at the Tbilisi State Conservatory, and the Montreux Jazz Festival, where he won first prize in prestigious Bösendorfer Solo Jazz Piano Competition. He was the youngest participant of this highly acclaimed annual festival and competition. After his arrival to the US he had concerts and played at jam sessions in New York’s prestigious jazz clubs. In 2011 at age 15 Beka was selected as a semifinalist of the Thelonious Monk International Jazz Piano Competition, where his performance was highly praised by members of the jury, which included Herbie Hancock, Danilo Perez, Jason Moran, Renee Rosnes, Ellis Marsalis and Wayne Shorter. Now 16-years-old Beka has performed with many of the jazz greats of our time and headlined at the Black Sea Jazz Festival. The maturity of Beka’s writing, arranging and play on his debut self-titled album is unparalleled by most. The album, released on the Roxboro Entertainment Group label, features Beka’s collaborative performances with Stanley Clarke, Lenny White, John Patitucci, Victor Bailey and Wallace Roney. He was brought to the attention of Stanley Clarke by his Return to Forever bandmates, Lenny White and Chick Corea, who had performed with and experienced Beka’s playing. “It’s exciting to see the energy he has and he wants to tell you all about it,” Clarke says.