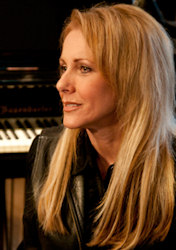 Innovative songwriter, producer, arranger and performer Sunnie Paxson has already proven herself as a talented jazz pianist and recording artist. Paxson has toured with Grammy award winning bassist Stanley Clarke and has recorded and/or shared the stage with many including Justo Almario, Larry Carlton, Danny Gottlieb and Michael Paulo to name a few. Her compositions and performances can be heard in feature films and television including the smash hit  “Desperate Housewives.”

A native of Philadelphia, Sunnie was a child piano prodigy from amusical family. Her skills were honed by studies with world-renowned pianists Bernard Peiffer, Jimmy Amadie and Ray Santisi. Paxson attended Berklee College of Music and the Philadelphia College of Performing Arts.

Paxson was voted one of “Los Angeles’ Best Jazz Performers” in Los Angeles Magazine. In the world of radio, Sunnie is known on stations throughout the US as well as internationally. This was due to her successful debut solo album, Groove Suite, which contained the ultimate feel-good single “Do It (‘Til You’re Satisfied),” featuring longtime friend Clarke on bass. Jazz Week listed Sunnie as one of the top 100 artists with the most spins for two years during the peak run of this CD. Sunnie’s newest album,“ Bohemian Sun,” is to be released on the Roxboro Entertainment Group label. She returns to her solid jazz roots with this straight-ahead jazz trio record which consists of herself Stanley Clarke/bass and Ronald Bruner, Jr. /drums) featuring some of her own compositions, some standards and one song written by Clarke.

Listen to tracks by Sunnie and purchase the CD at Amazon.com

Listen to and purchase Sunnie’s music at Itunes